Peel the pear and cross it out. Put it in a water with half lemon juice, to avoid the pear to become dark. If it’s organic, keep the pear’s skin too.

Mix the almond paste with the remaining lemon juice, add the agave syrup, salt and pepper and make a homogenous dressing.

Put some olive oil in a pan and caramelize the slices of the pear on each side, without overlapping it.

Cross out the baguette and roast it on a grill or in the oven until it becomes crunchy.

Put a slice of Parmigiano on each slice of baguette, then, put few pieces of pear and season with the almond dressing. You can put some almond flakes on the top for decoration.

This recipe
was made with:

No products were found! 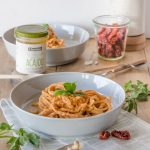 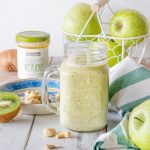 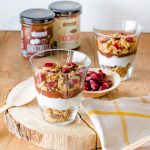 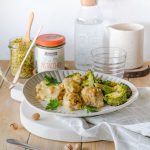 Chicken bites with yogurt and pistachio 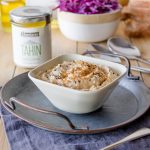 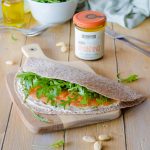 Piadina with salmon and rocket with almond and yogurt sauce

Bruschetta with mushrooms, hazelnuts and parmesan

Couscous with pistachio and lemon

Figs with ricotta cheese and pistachio

Sweet and sour salmon with pistachios

Vietnamese rolls with vegetables and shrimps

Croissant with yogurt and Chocobella

Vegan pancake with cinnamon and orange


This site uses technical cookies and third party profiling. To learn more or opt out, read the complete cookie policy statement. By continuing to use this site, we assume you are happy with it. More info